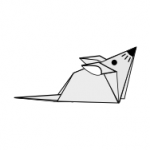 This tradtional fold is based on the “fish-base” one of the four common traditonal origami bases. The Origami Crane, for example uses the “bird-base”. It is an easy fold as it only uses simple folds and two inside-reverse-folds.

I like the Mouse for it’s simplicty and comic look. it’s definetly not as expressive as Joisel’s famous Rat, but it is also so much easier! You can instantly tell that it’s supposed to be a mouse and you will be able to fold it right away

Tastes vary. So I included different kind of instructions to learn how to fold this mouse. Some might prefer the written instructions, others may think the tutorial video is more easy to follow.

This diagrams have been  drawn by me using inksape and a lot of time. You can download PDF Instructions for the Origami Mouse  or just use the image below. The diagram is under creative commons so you can share it with you friends for free. (See note at the bottom for more information) 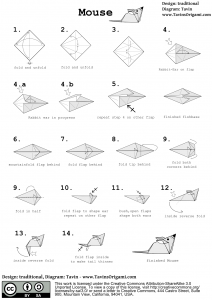 I believe in sharing. So this Origami Mouse is license under a free license. What does that mean for you? I chose the CC-BY-SA license, so you can share and even sell the diagrams as long as you credit me. If you build upon my work your new creation needs also to be under this license. This Idea is called “copyleft”. You can copy as long as you let others copy. So rather the prohibiting sharing, this license forces you to share. 🙂

For example you can hand this diagram out in class. You can even make your own instructions based on mine as long as you share alike.

Born and raised in Germany, Wolf aka Tavin is a YouTube Origami guru. On this website he writes about origami and his instructional videos as well as everything between the folds View all posts by Tavin →